The crazies from cabin fever have been setting in already.  I’ve been extra spiky and a bit cheeky really as a result of just not having the capacity to run as far as i’d like (thanks so much, first cold of the season!).  I’ve logged a few short runs, but they’ve hardly been enough to shake the cobwebs and the weather and my motivation are both looking pretty dismal after the last half marathon.

The only logical solution to such things of course, is retail therapy.  So physical therapist mandated, i might add,  I took myself to the running shoe store 🙂  I’m very happy with the folks who steered me towards some minimalist Mizunos that I’m loving so far!  My friend described them as “dragon-ish.”  Who doesn’t want to feel like a mythical lizard beast during a run?! It also doesn’t hurt that they happen to be my favorite color: “safety green!!” 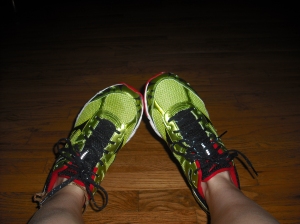 The hunt remains ongoing for my beloved Asics, alas, as the ones I’m used to seem to only be available in a freakish pink shade… (I have nothing against pink, mind, its just that it is universally recognized, or should be, that pink is not especially quick as colors go. Orange is the fastest color, of course, with green following a close second.  I can’t run in  slow running shoes, that’s just contrary to the cause.)  Any suggestions out there for other shoes I should check out?

Open plea to Asics: Please bring back the Orange Gel-Kayano!  (Not threatening or anything but I might be forced to explore some exceptions in my brand loyalties if you don’t knock it off with the pinks and the purples and the flowers already.) xoxox Mary

Eye Will Not Cry

Chukar and outdoor life in the American West.

A public diary of personal reflections

The greatest WordPress.com site in all the land!